Feral hogs are destroying farmers' livelihoods. Can everyone agree on how to fight them?

Feral hogs are destroying farmers' livelihoods. Can everyone agree on how to fight them?

DES ARC — Brad Parker is a farmer, but he doesn’t plant crops anymore.

He owns cattle and acres of land, but he refuses to grow beans like he used to — all because of feral hogs.

“The reason I quit planting crops is four years ago, the last time we planted beans, I went down one evening after I’d just got through planting the field,” Parker said. “It’s like a 60-acre field. And it was still a little bit light, and I look down in the field, and them hogs were going right down the rows ... picking them beans out of the ground.

“I told Dad, I said, ‘This is stupid. I have to go back in there and replant.’ And the next few days, they did it again, then that was it. I told him, ‘We gotta do something different.’”

Parker is just one of many farmers and landowners in southern Missouri who struggle with feral hogs.

The animals are a nonnative, invasive species. They’re large and aggressive, with some weighing 400 pounds. They carry diseases that are communicable to livestock and people. They eat acorns and other animals, depriving native species of their food sources.

The greatest problem for farmers is rooting. The hogs dig with their snouts and wallow around, creating pits and tearing up crops and terrain. According to the Department of Conservation, a single group of 10 hogs can destroy 10 to 20 acres in one night.

The pits created by hogs can destroy farmers’ livelihoods. 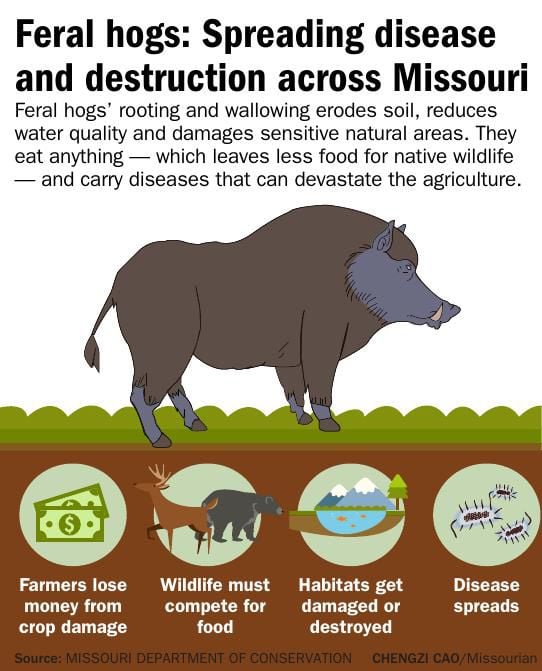 Earl Parker (no relation), who raises cattle outside Boss, said that hogs have ruined many of his fields, some of which he uses to grow hay for his cattle. He invites people to come hunt and trap them on his property. Parker says he’s tried to hunt them himself, but they’re hard to hit and unlikely to be out during the day.

Earl Parker retired in 2006 and moved to his current property but said he didn’t have any problem until the hogs came, most of them in the last few months.

He points to his main hay field, a scarred plain dotted with piles of upturned earth.

“It’s just pockmarked all over. I don’t know what’d be the best way to try to fix that,” he said hopelessly.

Earl Parker says if he can’t solve the hog problem, he’ll likely have to cut down on his herd of cattle.

Rod Williams, who raises cattle south of Bunker, said he didn’t want to deal with hogs but soon found that he had to.

Williams has about 60 cattle. He was trying to grow his herd, but the damage the hogs have done to his hay fields may mean he has to sell some.

Brad Parker said that dealing with hogs can be expensive, from buying a certain type of fencing to hunting equipment to traps and rebuilding. He says hogs can do thousands of dollars’ worth of damage a night.

For some, like Brad Parker, hogs have been plaguing their land for decades. For others, hogs have only entered the picture in the last couple of years.

According to the Department of Conservation, the hogs are “prolific breeders” capable of maintaining a 166 percent yearly population growth rate. While many hogs are trapped, snared or hunted, many more are born each year.

No one is quite sure where the hogs came from, but some have said that they must have been brought in for recreational hunting. In fact, Earl Parker said, “some of the guys killed one on down the creek there, and it had been castrated already.”

Rod Williams says there were no hogs until three years ago. He’s certain that someone has been bringing them in. Landowner Kenny Piatt agrees that the hogs came around three or four years ago but doesn’t think they were brought by hunters.

Ultimately, it comes down to the statistics.

“It’s a numbers problem. You don’t have enough people hunting them, and there’s too many hogs,” Brad Parker said.

“We’re trying to deal with them, but it’s a losing battle.”

While many agree that hogs need to be eliminated, there’s little consensus on what helps and what hurts when it comes to eradication efforts.

The department uses trapping as its primary eradication method. Large metal pens are suspended in the air and baited with corn. The goal is to capture an entire sounder, or group of hogs, at once. Once they’re caught, someone from conservation will come to shoot the hogs and allow them to decay. State documents indicate the effort was budgeted almost $2 million in 2018.

The Department of Conservation has implemented some regulations to ensure that their traps are as effective as possible.

A hog-dogger is someone who uses hunting dogs to track and hunt feral hogs. Jeffries believes that allowing hog hunting encourages the release and spread of hogs rather than eradication. However, while it’s illegal to shoot a hog on conservation land, private landowners can deal with hogs on their own land however they like.

“Landowners do have that right to protect their property and shoot hogs, but that’s not going to result in eradication,” Jeffries said.

“We prohibit hog hunting on our conservation areas: one, so we don’t have hog-dogger interference with our trapping efforts, and two, to not encourage additional releases in other parts of the state, because we tried hog hunting for 20 years,” Jeffries said. “We encouraged hog hunting (in conjunction with trapping). That resulted in new populations popping up in west central Missouri around Fort Leonard Wood and in Gasconade County.”

The department implemented the no-hunting regulation in 2016, and since then it has received some backlash, especially in the Wayne, Reynolds and Iron county areas, described by Jeffries as a haven for “hog hunting culture.” Most of the interviewees for this story are from those counties.

Jeffries explained the reason for not allowing hunting or placing a bounty on hogs.

“The last thing that we want to do is create anything that would put a value on these, whether it’s a food value or recreational hunting or a monetary value.” 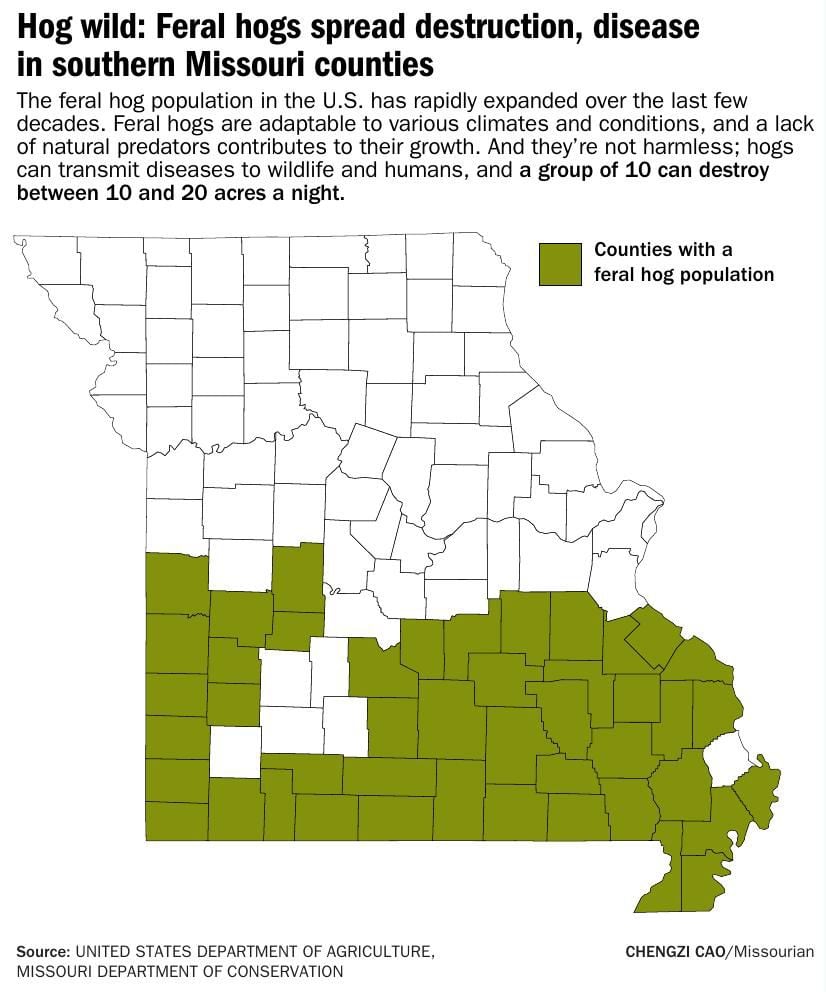 Dan McMurtry, district supervisor for USDA Wildlife Services in Missouri, says the department has tried nearly every method for dealing with hogs but that trapping is “far and above” the best way.

If a landowner hunts and chases a hog on their property, he or she would need to stop upon reaching conservation land or face a fine for shooting the hog. This can become a problem for landowners like Morris.

Williams called the Department of Conservation’s no-hunting policy “a joke.” He thinks it would be better to allow and incentivize hunting, just as it’s done for other animals.

“They got rid of the wolves. Put a bounty on them. We had bounties on coyotes. That’s all they’ve got to do. People around here, they’re getting hogdogs now to try to get this shut down,” Williams sai.

Williams says trapping can sometimes work for sows and pigs, but it tends to be ineffective for the bigger hogs. He believes hunting with dogs is more effective.

He says the hogs run to conservation land like “a refuge.”

Piatt also thinks a bounty would be a good idea.

“We have I don’t know how many deer hunters every year that come in here. Some of these people come from the city. They may see 50 hogs and no deer. Why couldn’t they kill two or three of them hogs?” Piatt said.

Brad Parker said, “The hogs don’t move in the daylight, so a farmer that works all day, you know, he’s gonna have to protect his ground. He’s going to have to get out at night and do something. And trap, too, because, you know, you don’t catch the big ones in the traps, and they’re the ones that do the most damage.”

Parker’s land borders Graves Mountain, which is no-hunting land. He says many of his hogs come from that direction.

Responding to claims that the hogs use conservation land as a refuge, Jeffries said, “I don’t think they’re safe on department areas if we’ve got traps there.”

Last year, the Department of Conservation and the USDA killed over 9,000 hogs through trapping.

Missouri has been divided into six different “elimination zones” in which hogs are systematically trapped and killed. McMurtry says that Zone 1, near Truman and Stockton Lakes, is almost rid of hogs and that tremendous progress is being made in Zone 2, near Fort Leonard Wood.

Rob Elder, communications director for the Missouri Hunting and Working Dog Alliance, said that his organization reported over 1,800 hogs killed by 23 MHWDA members.

The problem of feral hogs is a complex one. There may be consensus on eradicating hogs, but there’s little agreement on how to do it.

In an issue that often becomes political, Brad Parker just wants to find a solution that will help everyone.

“It needs to be everybody working together instead of one group telling another group, ‘You know, you can’t do this or that.’ Because when it’s all said and done, they’re a nuisance animal; they’re not a game animal.”

He believes that part of working together is allowing hunting on conservation land. He says the current system is expensive for taxpayers and it would be better to allow people that are already hunting deer to shoot hogs if they see them.

Elder says it will require a “coordinated effort” to eradicate hogs in which trapping is used to catch the juvenile hogs and hunters shoot the rest.

Elder believes people should be able to use a variety of methods to control and eradicate the hogs. To make any one method illegal, he says, is to lose a valuable tool in the arsenal.

Brad Parker thinks it may require some action and attention from Jefferson City, but he thinks that people there are too far from the problem to care.

He said he told lawmakers during a recent meeting, “If these hogs come up here in Jefferson City and got in your backyards and started eating the tulips, something might happen.”

Elder thinks the problem could be better dealt with on a local level. He said, “The best approach would be, the counties that actually have hog problems, turn this over to the county commissioners, let them have some of this funding. Talk to the landowners and the hunters and work in a coordinated effort.”

Parker, for his part, wants to set aside the arguments and get to eradication.

“If we work together, we could get a lot better results,” he said.

Read the full story from the Missourian.